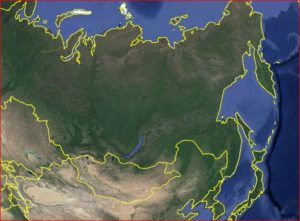 In common with all areas on the earth different countries have unique geology, landscape, ecology and human history.

The  northern Asia image  covers the countries of China, Russia, Mongolia in the north and north and South Korea and the islands of Japan in the east. Each of these countries have their tourism packages generated by local or global operators, and it takes integration of material from a range of sources to create a  geohistory tour to link the natural and human history of each region.

Work in Mongolia included a tour in the vicinity of Ulanbataar that showed aspects of the local geology and geological processes and the human history of Mongolia through the stainless steel statue and commemorative museum of Gingis Khan to the human scape of the city developed from being part of the USSR for 70 years from 1920 to its progress as a democratic republic.

The Geological information on processes that created the landscapes and natural resources of Mongolia combined with  its human history including the fiercely independent nature and adaptability of its people show why Mongolia conquered much of the known world under Gingis Khan.  Mongolia is geographically squeezed between   Russia and China, and these neighbours have greatly influenced its history .  Currently it is an independent democratic country with new links to Australia through development a Department of Foreign affairs and Trade (DFAT) office in the capital Ulanbataar.

I personally recommend as do others in Trip Advisor booking  your   tour of Mongolia through Montrails for small personalised group and individual tour experiences. I recommend that you first carry out search of tours offered – Contact Mr Erdene  Sedjav for tours in Mongolia by Email here to discuss  tour options with Mr Sedjav and his staff. Alternatively you can Phone -976-95957701 (mobile). The office address for Montrails is

I include a brochure from Montrails and a series of happy snaps take on a trip to the Stainless Stell statue of Gingi Khan when I was privileged to be in Mongolia in 2016. My impressions and interests were :