Geohistory tourism in Australia is just beginning. The Ecotourism component of Geohistory tours is better developed than the Geological or Geotourism component. Cultural tourism is developed in Europe based on many thousands of years on human history and culture and is an evolving part of tourist experiences in Australia. The world science fair has been held in Brisbane, Queensland  for the past 3 years and this year was located in the Southbank Parklands adjacent to the  QPAC centre. 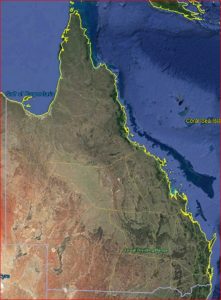 Queensland has the potential to create a thriving industry in geohistory tourism based on its climate, local development and natural resources. the ways that these tours could operate would include:

1.. Traditional tour with guide and brochure and commentary and a set agenda for the travel.  This would suit larger tour groups and particularly those from overseas with limited English and time to visit the State.

2. self guided tour using brochures, printouts,  Thus would link to the grey nomads who have both enough time and are not very computer literate and like to travel the main highways of the country seeking out interesting places to visit along their travels.

3.Self/tour  guided tour using phone apps or websites would  link best with tech savvy tourist who enjoys the constant use of   smart phone apps to locate all their  items of interest  .   This concept of using a hone app to highlight the building stones of the city of Brisbane was first showcased in the International Geological Congress (IGC in 2012) as the Geotourism Brisbane app  This has been upgraded and used in the 2017 World Science Fair  (e.g. Konect Tourism).  The concept includes creating digital postcards in front of sites of interest. Regions included and shown on the following slide. The Konect App could be a model for self -guided Global Geohistory Tourism. The most northerly area covers the Etheridge shire and has been complied with the purpose of creating Australia’s first geopark. Other areas completed include Eungella National park and the Brisbane CBD. Work is continuing on North Stradbroke Island and the Redcliffe Peninsular. 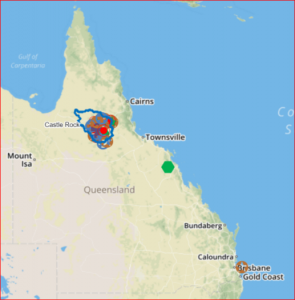 The Queensland map illustrates where a telephone app has collected material over the state for geohistory tourism.  The blue highlighted area covers the Etheridge Shire which was proposed as Australia’s first Geopark. unfortunately due to local politics this did not eventuate and there is significant information about the geological features of this region documented in the Konect Tourism phone app.  Similarly information for the Eungella national park, Brisbane CBD and parts of the Redcliffe peninsular north of Brisbane has also been completed.

Further compilation of the Redcliffe Peninsular and the immediate inland regions of southeast Queensland is being undertaken with guided and self guided tourist expereinces.  Places to stay overnight and for a few days to adequately explore the southeast is being compiled.

More from my site